The Story Behind the Greenwell Water Saver

Few people can claim that the constant scattering of mulch and fertiliser by blackbirds led them to develop a product that not only solves the problem, but also has many other positive environmental benefits.

My wife Helen and I have lived in Torrens Park in South Australia for many years on a steep block of land. As much as we both enjoyed gardening, our efforts were continuously frustrated by the endless scratching of blackbirds.

It was impossible to keep applied mulch and fertiliser around our newly planted shrubs and trees. Watering our trees and shrubs was an even bigger problem, due to water runoff caused by the slope of our block. 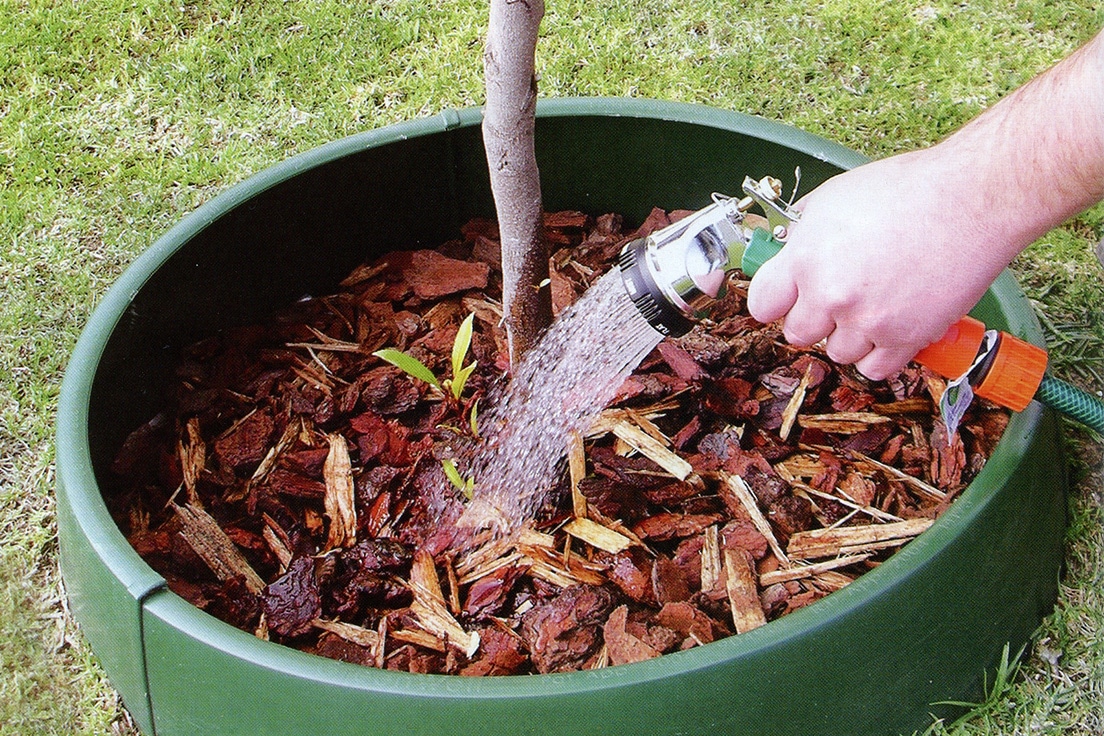 It is often said, “Necessity is the mother of invention”. It certainly was for me and Helen. Frustration finally led me to thinking seriously about finding a permanent solution to our blackbird and water runoff problems. I was fortunate to come up with an idea that not only solved both problems but also dealt with many other issues associated with the establishment of newly planted trees and shrubs. The product I came up with I named GreenWell, and it is currently sold across Australia and in several other countries. It has proved a winner!

In the first instance, I had a prototype made by a friend of mine involved in the plastics industry. Even at that very early stage, I suspected that my Greenwell prototype may well appeal to a wide range of people. I spent many months travelling across Australia armed with confidentiality agreements and my GreenWell. I spoke with home gardeners, arborists at municipal councils and land developers, seeking their opinions about its applications and possible improvements to the design.

The positive feedback I received led me to be confident that I had a product that could appeal to a very wide range of people involved in the establishment of trees and shrubs and interested in saving water.

The final design was settled on in collaboration with an extremely skilled plastics designer by the name of Neil Reynolds. One feature I considered to be essential to the Greenwell was ensuring the plastic surrounds could be opened and closed easily while staying water tight. This proved to be quite a difficult technical problem, but after many weeks of trial and error, this essential feature was incorporated into the final design.

I was then at a stage where the homefront problems had been solved and the chance for commercial opportunities were showing up clearly on the radar. It was a time of great excitement and anticipation of the possible future commercial benefits.

The GreenWell plant surround was developed to save water and optimise deep-root watering. The design of the GreenWell maintains an efficient bowl integrity around the tree base, facilitating deep water delivery during tree watering.

Expensive to construct and maintain, earthen berms would no longer be necessary. Deep-root watering is obviously a high priority for most home gardeners and municipal councils, but it is not easily achieved without GreenWell.

Before GreenWell, when newly planted street trees were watered using council watering trucks, much of the applied water was wasted due to runoff that ended up in street gutters. GreenWell manages to deliver every drop of applied water directly to the tree root ball, with no runoff. This saves a great deal of water and money for GreenWell users.

Not a drop of water is wasted. By using the GreenWell, councils no longer have to build and maintain earthen berms around trees, and have found this to be a further cost reducing factor of considerable magnitude.

Another benefit provided by the GreenWell is its quick and easy installation, due to its sharp serrated base and its special zip join. The product is made of recycled plastic, which makes it attractive from an environmental point of view, and is UV protected. It can be installed in the soil at whatever depth is desired and will guard against the intrusion of lawn or grass. It will also guard against trunk damage caused by whipper snippers.

GreenWell can be simply taken off an existing tree as itis easily opened and closed.

I am the first to admit that having a good idea is a good thing. But the real test is to navigate the legal and manufacturing requirements to launch it onto the market. I appointed a Patent Attorney who guided me through the process and attended to my intellectual property requirements – which were very complicated! Tooling was manufactured, and after many months the GreenWell was born.

I then arrived at a point where a major decision was made. I appointed HR Products, a major irrigation company in Australia, as licensee. The decision to appoint HR Products as the GreenWell wholesale distributor and manufacturer is a decision I have never regretted making.

For potential innovators, my advice is, if a unique idea is in one’s head, it is important to first produce a functional prototype and then spend a considerable amount of time testing the market. If positive, honest and encouraging responses are received, who knows, chances are that your idea may just be a winner. It will then be up to your judgement whether you embark on the winding and expensive road to achieving success in your chosen market. I suggest you appoint a Patent Attorney early in the proceedings. 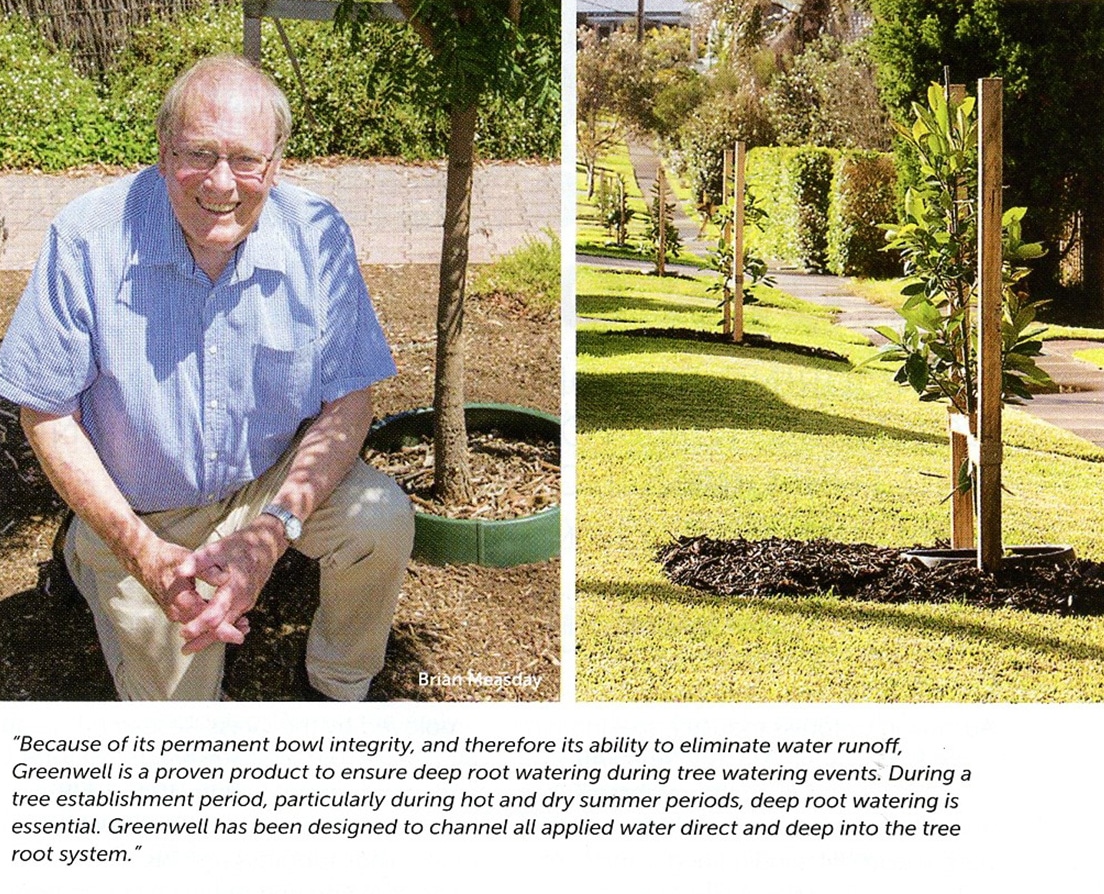 GreenWell has been a marketing success of substantial proportions. It is sold by Bunnings and several other retailers throughout Australia. GreenWell is used by a large number of municipal councils and home gardeners in Australia, Europe, Canada and the USA. It has also recently been introduced into New Zealand, and the early signs are great.

As the Greenwell inventor, I think the things that please me the most are the product's ability to save so much of our precious water, particularly as climate change has become a reality, and greatly improve the survival rate of newly planted trees in so many countries.