I have watched with interest the development of the Greenwell since 2000 and have used the units in my own garden with great success. I have seen them in use on street trees and on highway sloping banks. Why is it so successful? I initially trained as a Civil Engineer so I always want to know HOW.

Surface soil profiles are so diverse' Getting water into a root-zone can be a challenge. Continuing to do so until a new tree or shrub root system is established is even more challenging. This is without doubt, one of its successes, being about to control the volume of applied water until a soakage pattern spreads out widely to equally encourage a wide root spread.

I have realised there is created an advantageous micro-climate at the critical time of planting and establishing new roots in that first year. Surface breezes and winds are diverted around the Greenwell and this reduces surface moisture loss, another saving of applied water. Since the spread of water is so wide there is no chance of developing crown root rotting as there is only saturation when each watering is applied. Thereafter that soil profile is never more than at field capacity.

This unit compares much more than favourably with drip irrigation forms, particularly where water is at a premium' Unless sophisticated pulse watering techniques are used, water by drip or slow release methods develops a very narrow wetting profile and does not rapidly encourage a wide root development pattern. No wonder accountants in municipalities like them. They know the costs of land preparation and the costs of the tree and planting. Placing a durable Greenwell around that tree at a fraction of those costs, is such a great insurance that the tree investment can be grown with a guarantee of positive watering. What is more, the unit can be reused again and again after each tree is established.

Brian, your solid 15years of development and increasing success reinforces my view you have a winner in a classic form of elegant simplicity. others obviously agree based on your success to date. Congratulations.

Profile: Ian S. Tolley OAM is an internationally recognised Horticulturist consulting for more than 45 years with a special interest in Citriculture and propagation techniques. He was in the first small group of Australians to be awarded a Churchill Fellowship and studied Citriculture overseas for 5 months in 1966.

Ian is a founding member of the Australian region of International Plant propagator,s Society, joint founder and current Patron of the International Society of Citrus Nurserymen and a past president of both organizations. He created and promoted the concept of citrus Micro-budding, and developed the world's first all container growing citrus nursery using non-soil media in the 1960,s. He has invented more than 80 practical tools, many adopted by other growers and commercial interests.

A speaker and prolific writer on horticultural matters, his co-authorship of a practical small book of ‘Cinus for Everyone' for the Botanic Gardens of South Australia, has been popular since the first printing in 1999, with several reprints, and in 2009 was updated as ‘Citrus-A Gardener's Guide, Ian is currently completing his major book ‘Commonsense Citrus'- for use as a student training manual' for orchardists, and home garden aficionados. The text will be fully illustrated with charts, sketches and related photos. 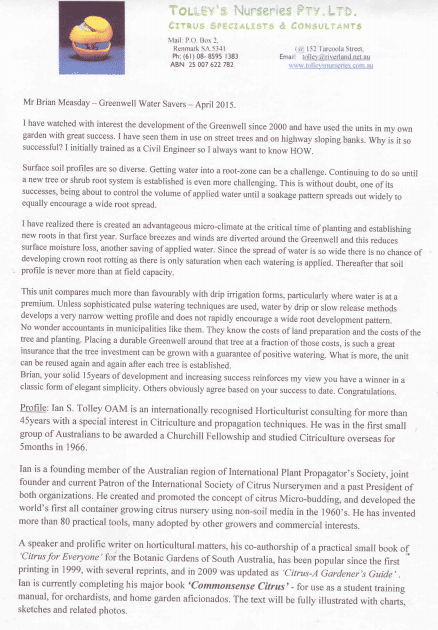