re the Greenwell that i reviewed for ABC television

As a national gardening presenter on television for the ABC's Gardening Australia, I get to test lots of new product each year, but when one comes along that is both very good and locally made,it is rare indeed.  Such was the case with the “Greenwell” that I tested last year.

I now have three in my garden and can report that a Sesanqua Camellia grew very well while I was able to encourage an acid media under it, contained by the “Greenwell”.  Well it grew well until a tradesman severed its roots while laying a drain, but that's another matter.  My grafted ‘Gross Lisse' Tomato grew 12 feet tall before it started groundward and all the while I was able to nurture it with mulch inside the ‘Greenwell”, but my really best performance has been away of protecting my Rhubarb from snapping of in the wind, not only was it well protected by a “Greenwell”, but It also coloured up best too.

I wish you well with your venture to make this more widely known as a very useful aid to better gardening. 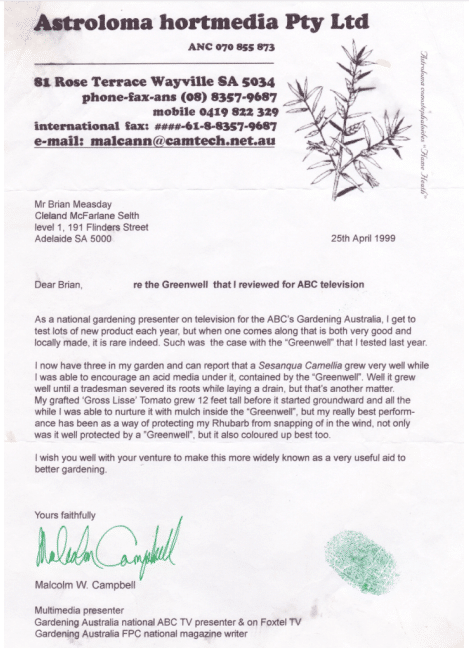